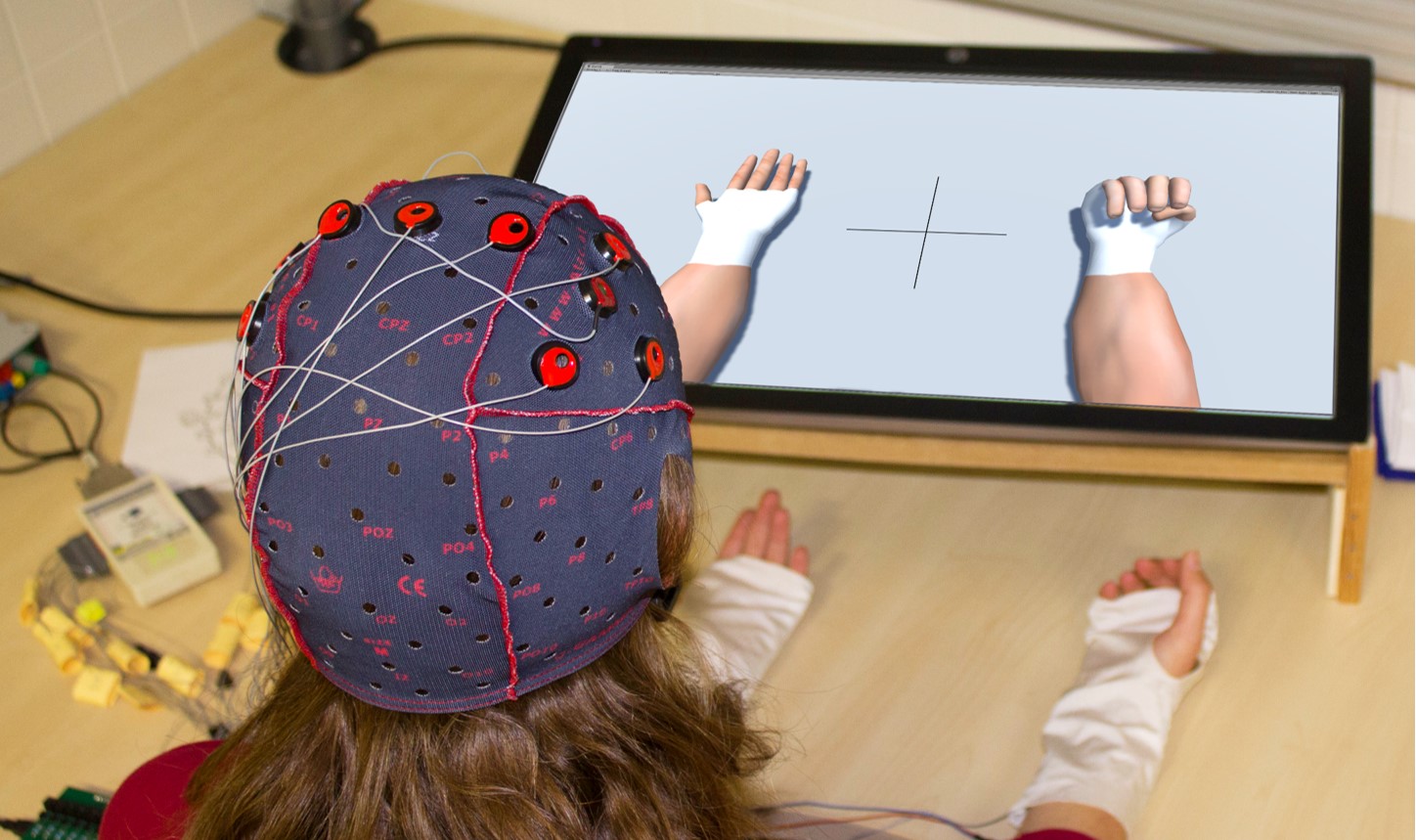 Modality of feedback:
The modality of feedback presentation, e.g., visual, tactile or auditory, for MI-BCI user training is often adapted to the sensorial abilities of the target population. For example, the choice of an auditory feedback was made for people with visual impairments [Young et al., 2014]. However, during a review of the literature, I discovered that the somatosensory abilities of post-stroke patients may be assessed but are currently rarely reported in BCI-based post-stroke motor rehabilitation.

The role of somatosensory abilities in BCI-based motor therapies:
BCI-based motor therapies post-stroke aim at co-activating the efferent motor networks, through motor imagination or motor attempt, and the afferent sensory networks, through the perception of a sensory feedback. This co-activation is assumed to be the underlying mechanism enabling the functional improvements and neurophysiological changes in the sensorimotor system observed after MI-BCI therapies [Gomez-Rodriguez et al., 2011]. The activation of the afferent sensory networks depends on the perception of the sensory feedback provided by the MI-BCI. However, over half of post-stroke patients have somatosensory disorders [Kessner et al., 2106]. Even though BCI-based motor therapy relies on a timely somatosensory feedback to the patient, a review of the literature that I led revealed that most published experimental studies do not report assessing the integrity of the patients’ somatosensory abilities. I argue that such an assessment could explain part of the between-subject and/or between-study variability, provide information regarding the mechanisms underlying the therapy and contribute to the improvement and adaptation of the therapy. I hypothesized that somatosensory deficits have an influence on BCI-based motor rehabilitation outcome and that such influence could differ depending on the sensory modality used to provide the feedback.

First results on neurotypical participants:
Therefore, I designed a protocol to assess if the somatosensory abilities and/or somatosensory-related neurophysiological profile of post-stroke patients influence BCI-based therapeutic outcomes. I also wanted to know if such influence could be modulated by the modality of the feedback. I considered two modalities of feedback (See Picure). One unimodal realistic visual feedback represented virtual arms placed over the arms of the participants to give the impression of embodiment. The second was a multimodal one composed of the same visual feedback associated with a vibrotactile feedback placed on the wrists. In a study aimed at validating the protocol for a future clinical study with post-stroke patients, we assessed the long-term influence of the two feedback on 16 neurotypical participants over 10 sessions of 2h each. We found that using a vibrotactile feedback in addition to a realistic visual feedback seems to have a beneficial influence on MI performances. This result is in accordance with previous results on neurotypical participants [Gomez-Rodriguez et al., 2011]. Our results also indicate that this beneficial impact remains true for long term training, which had not been tested before. Also, the level of expertise of the participants seems to influence the type of feedback to favor. In the future, the clinical protocol will be led in order to have results on the probable impact of somatosensory abilities on BCI-based post-stroke motor rehabilitation outcome.

Use realistic visual feedback for your BCI applications

A tutorial to use this augmented visual feedback for your own applications is available on this Gitlab Inria: .